Micro aerial vehicles (MAVs) with characteristic dimensions on the order of 10 cm will be instrumental in driving the data-driven decisions that are increasingly important in the commercial, industrial, and defense sectors. Current electric propulsion solutions for drones at this scale, however, are relatively loud, fragile, and have limited operational lifetime. In contrast, electrohydrodynamic (EHD) propulsion, where thrust is produced via the momentum-transferring collisions of ions with neutral air molecules, is a solid-state, silent mechanism for low-altitude flight. It is particularly well suited for use in MAVs due to its fundamentally electrostatic nature making it highly amenable to miniaturization. The lack of moving parts and simple mechanical design make inexpensive batch manufacturing possible.

Our research pairs analytical, numerical, and empirical methods in order to explore both the physical phenomena underlying EHD propulsion at small scales as well as the significant engineering challenges associated with fabrication and assembly. We are exploring new directions in improving EHD thrust efficiency, minimizing operating voltage, maximizing power density, and more. 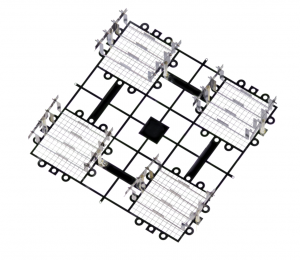 Low-power RF networks struggle with high agent count, mobile systems. As we move towards a future of ubiquitous insect-scale swarms, our ability to maintain high-throughput network links for connectivity fails. One solution is to supplement these RF networks with acoustic ones, taking advantage of the properties of acoustic waves (e.g, deterministic and simply modeled physical transmission, simple mechanical coupling) to get useful performance out of low cost, small components. Even using the smallest off-the-shelf acoustic components, however, may be prohibitive from a payload perspective given the extreme resource constraints of insect-scale platforms. An alternative would be to take a more holistic system design approach and add additional functionality into existing components, making them multifunctional.

The majority of researchers seeking to create insect-scale flying robots have focused on biomimetic flapping wing actuation. While significant progress has been made on these flapping wing micro aerial vehicles (FMAVs), biomimetic fliers remain challenging to design, build, and control; they struggle to exceed a thrust to weight ratio of one. Due to this fact, there is very little available payload mass for additional components. One example of holistic system design in nature is the phenomenon known as “stridulation,” where insects use passive mechanical structures on their bodies to communicate using the same actuators they use for mobility; a well-known example is the chirping of crickets, which is produced by a resonant membrane on the wing excited by a mechanical escapement mechanism provided by microstructures on the wing veins. Inspired by nature, we seek to engineer low-mass-overhead multifunctional system components, like wings with in-situ acoustic membranes. 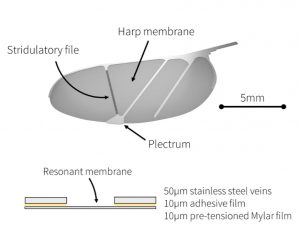 Control complexity in a multi-robot system can be defined in similar ways to computational complexity. For example, if a group of robots are tele-operated completely independently, then the operator cognitive load is order O(n) and total effort scales linearly with robot count. Given the challenges associated with 1:1 and even 2:1 teleoperation of robots in search and rescue and other contexts, simultaneously increasing agent count, decreasing effort burden, and maintaining (or beginning to make) safety guarantees is both tremendously difficult and tremendously important. Research in the space of human-swarm interaction aims to move towards O(1) effort for arbitrarily large groups of robots and has seen recent success, though typically only in simple, simulated environments and tasks.

Our work explores human-swarm interaction paradigms grounded in the physical constraints of both the robots and the operators. We seek to answer not only the question of how human operators can work with large teams of robots, but also how large groups of small robots should behave in human-proximal settings in order to minimize psychological burden. Peaceful coexistence is the goal; while task performance is important to optimize autonomous operation for, perhaps equally important to adoption is whether humans can tolerate a swarm in their environment. 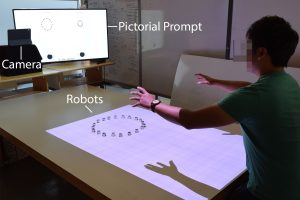